I’m terrible at sticking to reading plans because I tend to impulsively pick up whatever I’m interested in at a given moment, but I have plans for March that I really hope I can stick with and get done.  Between being in the middle of several books that I want to finish before the end of the month and having an enormous backlog of unread titles on my shelves, my goal is simple:  Read as many books as I can this month that I already own.  While I have hundreds of choices for what I want to read, here is a short list of the titles I am prioritizing for the month.

First up, I have been reading The Poppy War for the entirety of the year so far and would like to wrap it up sooner rather than later.  I’m actually enjoying this Asian-inspired fantasy quite a bit, but it’s both dark and heavily focused on military tactics, which makes for a slow reading experience.  I’m about halfway through and I hope that the second half reads faster, as I’m pretty well-acquainted with the world now.

I have a long history with Red Rising.  In my initial attempt at reading it a few years ago, I loved the dystopian world up until a plot twist about 100 pages in that completely changed the pacing and tone of the story.  This twist made me question if I would like this book, so I put it down for a while.  About a month ago, however, I decided that my tastes as a reader had changed over the years and that the big twist seemed more intriguing now than annoying, so I gave it another chance.  Unfortunately, this book changes yet again later on, and once again, I’m not sure that I like the direction that it went.  That said, at this point, I am pretty close to the end and want to finish it and see if the setup for a sequel is strong, at least.  This has been a wild ride of a book, and I don’t think I will know if I enjoyed it until I have read the final page.

As I said in my January wrap-up, Emergency Skin by N.K. Jemisin is one of my favorite reads of the year and it made me want to try some more books by her as soon as possible.  It’s hard to know where to start, but after reading the intro to a few of her books, The Hundred Thousand Kingdoms had the most intriguing start, so I’m going to give it a try.

Putting The Emperor’s Soul on my reading list for March spoils my February wrap-up a little, as it is going to be abundantly clear that I read Elantris by Brandon Sanderson recently.   Regardless, I want to read this short novella set in the same world so I can move on to tackle more of Sanderson’s writing in the future.  I don’t want to set expectations too high here, but I anticipate that I will have read a good portion of the connected-universe Cosmere titles by the end of the year, and I don’t have any issue with this. 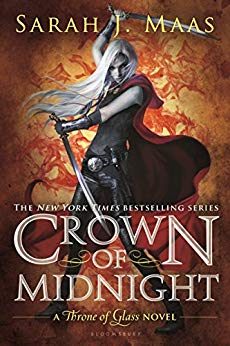 As my reading list might give away, I have been in love with fantasy books lately, but the genre tends to be pretty dense sometimes.  While I don’t think I’m going to want to move away from fantasy entirely for a few months, I think throwing some young adult fantasy in the mix will help keep me motivated.  Young adult fantasies tend to be more fast-paced and action-packed than the adult titles I read, which makes reading them a good change of pace.  Crown of Midnight is the second book in the Throne of Glass series, and while I was hesitant to pick up the first title, given that it has some mixed reviews, I ended up enjoying it quite a bit.  These books aren’t necessarily representative of the best that the fantasy genre has to offer by any means, but sometimes, a book just needs to be fun.

I am going to be participating in the Elderling-along, which is a book club dedicated to getting through the first two trilogies in Robin Hobb’s epic Realm of the Elderlings series.  The first title I will be reading is Assassin’s Apprentice.  I’m not sure what to make of this series, as I know very little about it, but I like supporting women in fantasy and Hobb is one of the big names that I have yet to read.  I’m excited to get started!

Finally, while I do not anticipate that I will read all of A Clash of Kings in the month of March, I would like to keep working my way through this massive tome so I can watch the TV show.  George R.R. Martin’s writing style is a little intimidating because his books are densely-packed with lore and details, but I just need to keep working through them and I’m sure I will get used to his style eventually.

Well, that’s about it for my March reading plans!  I don’t know if I will get through every book on this list, and I will also likely read several titles not featured here, but I would like to start highlighting what I hope to get to each month so anyone who checks in on this site can anticipate what reviews I might have coming along in the future.  We will see if this continues on or not, probably based upon how well I actually keep to my reading plans.

What are you reading in March?  Let me know in the comments below!