As I mentioned in my list of the best games I have played so far in 2018 (link here if you want to read about it), I love the Danganronpa series with all my heart.  With such a varied cast across the three main games, the series is just begging to be made into a ranked list of characters.  Therefore, here is the first of a three-part series on my favorite characters in the Danganronpa series.

Two disclaimers before we begin.  First of all, I love and adore everyone involved in making this series a reality, so when I criticize the voice acting or look of a character, this is a comment that the artistic choice made does not suit my personal tastes, and not an attack on the artist or voice actor.

Second of all, and I cannot stress this enough, this list is going to SPOIL every aspect of the games.  I am going to talk about plot events, murderers, and victims openly, as these events may be the reason the character earned its place on the list.  If you have even the slightest intent to play these games and haven’t yet, then bookmark this list and come back to it later.  All right, on to the list!

Teruteru is probably the only character in the series that I actively despise.  Every single time he opens his mouth, something perverted comes out.  He also worries way too much about appearances, as he is constantly grooming himself, and goes so far as to use a fake accent that he believes is more sophisticated.  My guess is that even the developers knew how awful Teruteru was, because he was unceremoniously executed in the first class trial, thus allowing everyone playing the game to breathe a sigh of relief, knowing that we wouldn’t have to hear from him again.

On the whole, I don’t have an issue with the ultimate imposter.  They don’t really harm anyone, and didn’t do anything to annoy me.  The problem is, due to the way the ultimate imposter was intentionally characterized, I know nothing about them.  The ultimate imposter has no known name or gender, instead spending their entire life masquerading as other people.  Maybe if the ultimate imposter had lived long enough to see the differences between Byakuya and them, they could have been higher on the list.  Since they died at the hands of Teruteru in the first chapter, any potential this character had was squandered by the brevity of their on-screen time.

There was so much potential with Korekiyo.  First of all, he just looks stylistically really cool.  Talking to him is fun because he is full of interesting anthropological factoids.  That said, I have two gripes with him.  On a more frivolous note, his English voice acting is really irritating.  He makes this weird hissing noise when he laughs that I assume is supposed to mimic talking behind a mask, but actually just gets on my nerves.  The more serious problem is his motive for the double murder of Angie and Tenko.  Turns out, Korekiyo is a psychotic killer who murders women so they can be “friends” with his dead sister in the afterlife.  Yikes.

I love Mukuro from a stylistic standpoint.  In general, I find the idea of the ultimate despair sisters to be cool, and I love the trial five and six plot twist of her and Junko switching places.  Unfortunately for her, the portion of the story where she was most relevant was long after she had already died.  Therefore, we didn’t get a lot of characterization out of her other than her idol-worship of her sister.  To me, Mukuro is a huge missed opportunity for the series, and my disappointment in her characterization is what lands her here. 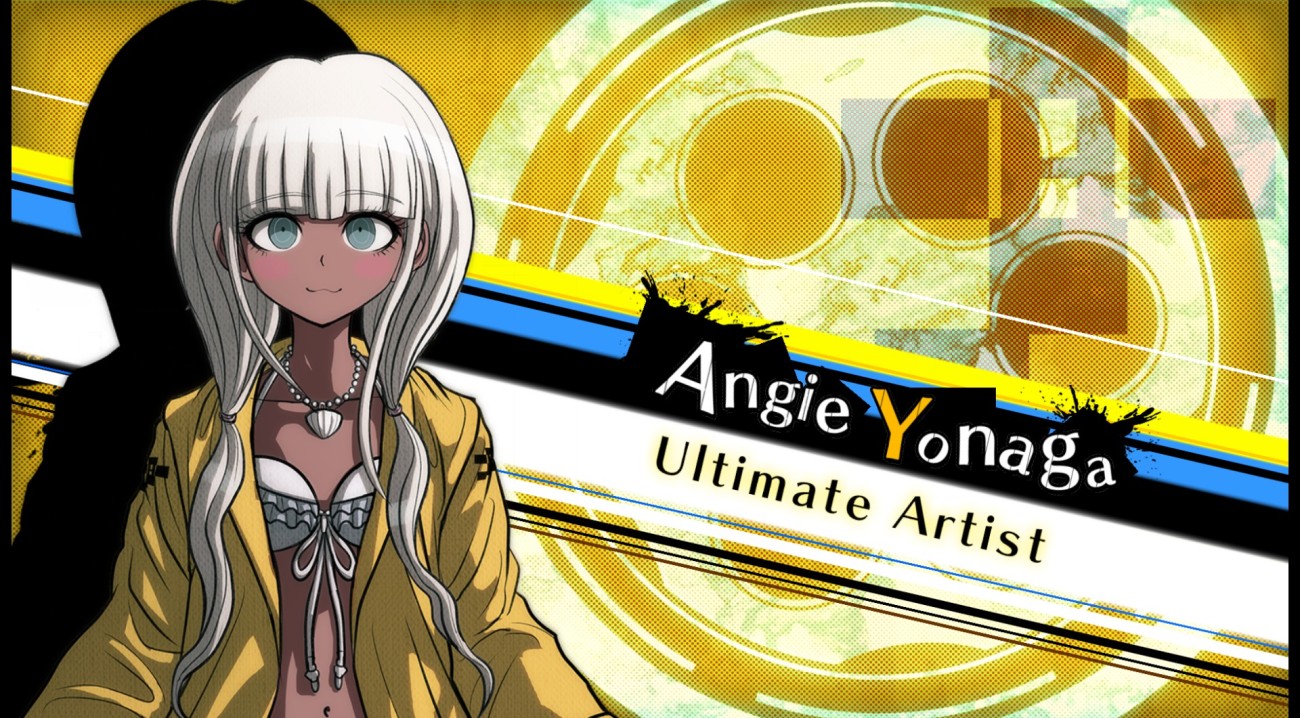 Angie is the most well-intentioned cult leader I’ve ever seen.  At the core of her plans, she really did just want to protect people and prevent more murders from occurring.  Unfortunately, her special brand of stopping people from murdering seems to involve being as annoying as possible.  Her weird love of Atua, the all-powerful god, seemed to be played off for laughs, but she got on my nerves more than I found her to be amusing.

Hifumi gives geeky people a bad name.  In the same vein as Teruteru, he’s creepily perverted in a way that is only marginally less grating on the nerves.  He’s also easily manipulated by women, as he willingly went along with Celestia’s murder plot, even though anyone with two brain cells to rub together could have seen that this plot would end in Hifumi’s death.  His free-time events can be somewhat interesting, as he talks about fanfiction and general “geek culture”, and that’s the only thing that keeps him from the rock bottom of this list.

This one is probably a bit of an unpopular opinion, but the split personality aspect of Toko’s characterization always felt like someone had a really great idea to spice up one of the class trials, and realized far too late that the rest of the game would now need to include this plot device.  Having a serial killer personality also meant that the game started feeling like a broken record, as Toko was repeatedly blamed for all of the murderous activities happening at the school for the remainder of the game.  It also doesn’t help that I don’t like either one of Toko’s personalities, as Toko is rude and abrasive, and Genocide Jill is too loud and squeaky for my tastes.  Speaking of squeaky…

Let’s get this out of the way first:  Mikan getting inflicted with despair disease, regaining her memories, and reverting to a remnant of despair is one of the best uses of foreshadowing I’ve seen in modern gaming.  It’s just too bad that, other than that, she’s got no other redeeming qualities.  Mikan is undoubtedly my least favorite voice acted character in this game.  She’s squeaky and uncertain of herself to the point where it takes five years for her to finish a thought.  I also don’t care much for the fanservice bait of her falling down into suggestive poses, mostly because it leads to her talking more.

I just want to send a huge “bravo” to the voice actor for Hiyoko, Kira Buckland, because anyone that can be both 2B from Nier:Automata and Hiyoko deserves some sort of award.  Similarly to Mikan, I’m not the biggest fan of Hiyoko’s voice acting, because she’s loud and squeaky.  I do, however, like her plot arc of wanting to be strong after Mahiru’s death.  Unfortunately, the potential her character could have had was ruined by her being murdered by Mikan shortly after this revelation.  Yet another character that had their potential unceremoniously ripped away by the developers. 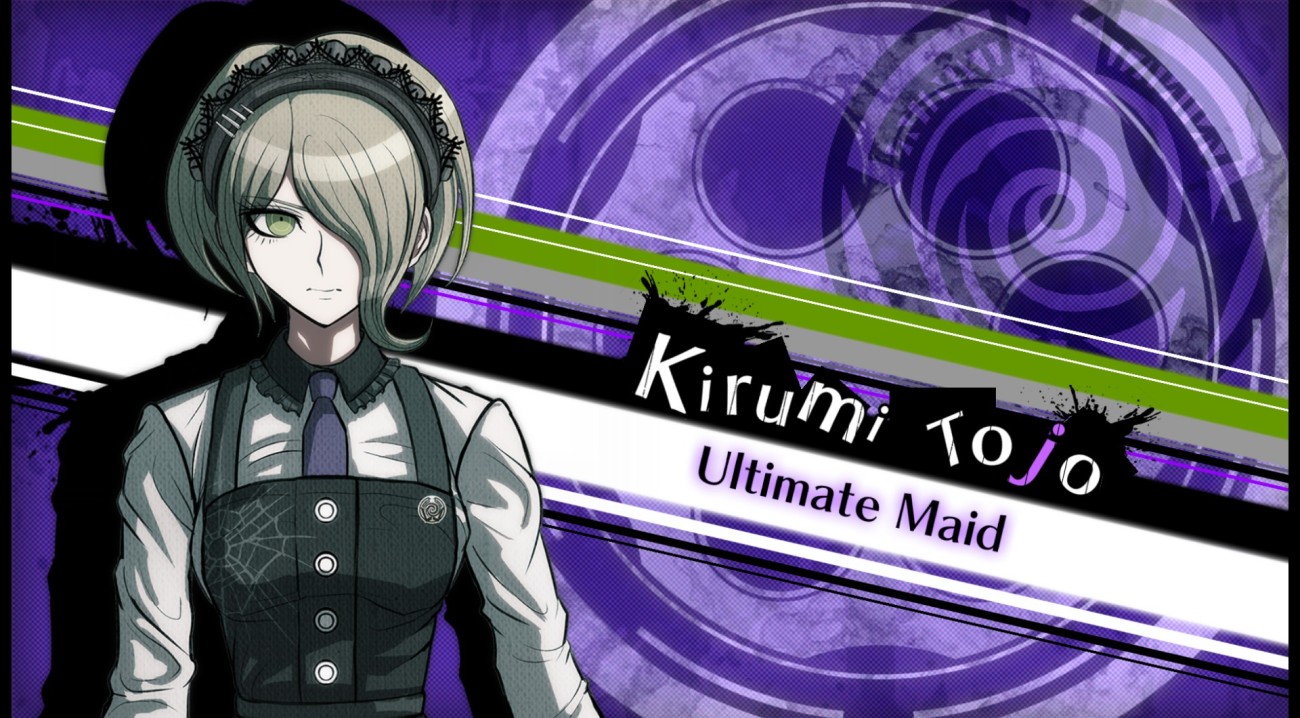 I love Kirumi from a stylistic perspective.  She has this really cool goth maid look going on that really works for her.  The main thing that gets her this spot on the list is the murder she commits.  She creates a really over-the-top scheme that involves having to watch Ryoma, a character I adore, get eaten by ravenous fish.  This leads to a class trial I really didn’t care for, and the end result is Kirumi trying to manipulate others into sacrificing themselves even after she is found guilty.  Her inability to accept that she had lost was frustrating, and just made her a sore loser.

Kazuichi is actually a fun enough character, though a little bland.  As a note to Danganronpa developers, this is how you can make a character that’s interested in women without coming off like an unmitigated creep.  His interest in Sonia gets played off for decent comedic value that is genuinely funny.  I’m not a huge fan of his character design, though, as his vampire fang teeth and ugly jumpsuit don’t help endear him to the audience.  I can’t say I understand why his character made it to the end of the game, either, as he isn’t exactly the brightest bulb and didn’t do a lot to help Hajime during class trials.  That said, there is some precedent for having the dumb characters make it to the end… 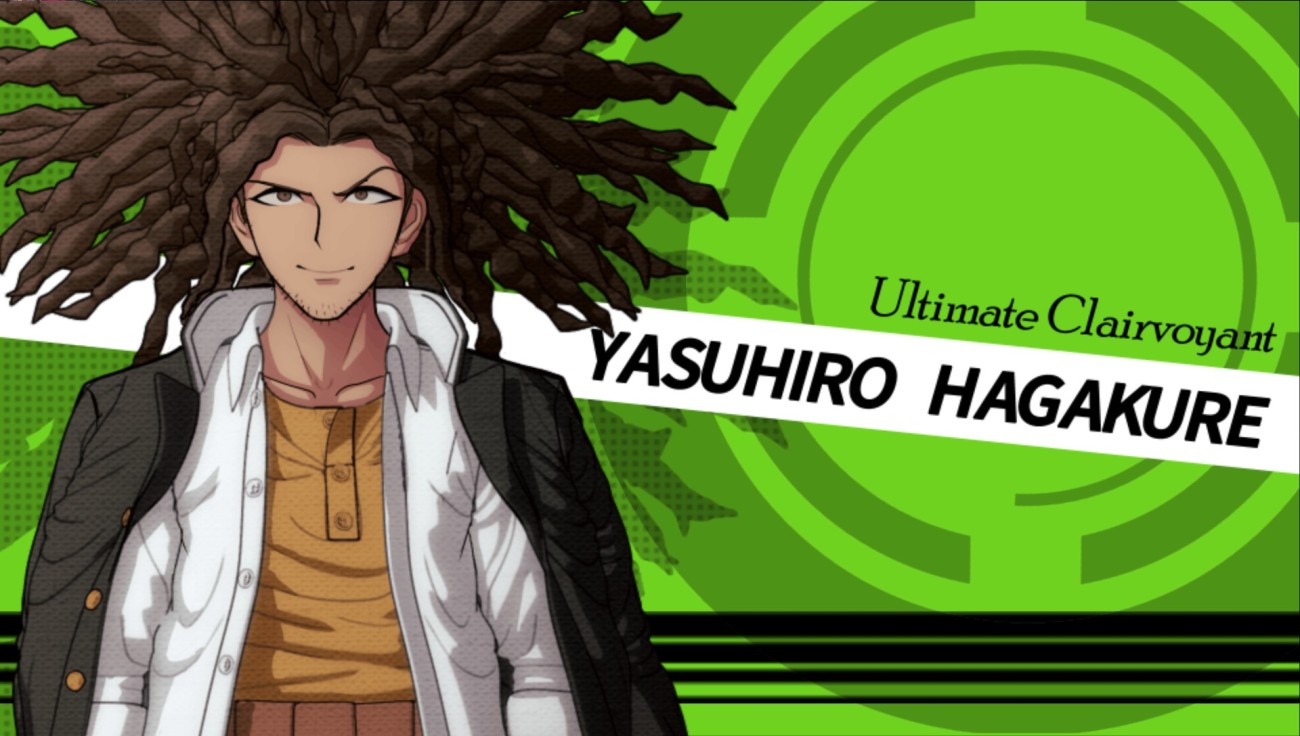 Yasuhiro is a sweetheart, and he’s absolutely adorable in that regard.  With that said, his character makes virtually no sense.  He’s attending a school for the best of the best as a student that keeps failing grades repeatedly and openly admits he only predicts the future successfully thirty percent of the time.  Additionally, in one trial, everyone has to convince him that ghosts are not playing a hand in the events of the game.  I don’t understand why he’s even at this school, much less why he got picked to be one of the surviving characters of the first game.

Tenko is a bit crazy, sure, but she’s a genuinely sweet person that looks out for her friends.  Up until the very end of her life, as she agrees to help with Korekiyo’s crazy ritual, she is devoted to helping others, albeit in a misguided way at times.  Why does she earn this place on the list?  Because her death is the reason that I about cracked my controller in half a million times trying to figure out that the proper response to hangman’s gambit is “SEESAW EFFECT”.   I could theoretically blame Korekiyo for this, instead, but I already have enough reasons to dislike him, so I end up being inherently mad at Tenko for this every time.

Mahiru’s ultimate talent should be “ultimate bland character”.  There’s nothing wrong with her, except that she’s exceptionally uninteresting.  After she dies, the Twilight Syndrome Murder Case does shine a light on her character that makes her somewhat more interesting, but it doesn’t undo how dull she was before her death.  Unfortunately, because she slipped under the radar and nothing was known about her until her death, she will forever be the most bland character in the Danganronpa franchise.

Stylistically, Ibuki is one of the coolest looking characters in the entire series.  She’s colorful, and her entire aesthetic actually makes it pretty easy to guess her talent by looking at her.  Unfortunately, then she opens her mouth and loses me.  Unlike Mikan and Hiyoko, where I didn’t care for their higher-pitched voices, I think the pitch of her voice actually suits her.  Instead, I think the problem is that she’s just too peppy for my tastes.  She’s so exuberant that I find it exhausting to keep up with her.

It’s really hard to determine how I feel about Tsumugi.  She looks like an even blander version of Sayaka (and is voiced by the same person – fun fact), which I can’t believe is even possible.  For a long time, she was competing with Mahiru for least interesting character of the series, until it occurred to me that this it exactly what the developers wanted.  Making the mastermind an otherwise really uninteresting character is a brilliant move.  That said, since this was my third Danganronpa rodeo, I figured out this plot twist halfway through the game and that really lessened the impact of the ultimate reveal and my interest in Tsumugi as a character.

That’s it for the first part of this list!  Stay tuned for the rest of the list and let me know which characters you love and loathe in the comments!