Top Five Tuesday is a series hosted by Bionic Book Worm, and I would highly recommend that everyone goes and checks out her initial post!  Today’s post is about picking some books that need to have movie adaptations made approximately yesterday.  Personally, I absolutely adore seeing movies made of books because I’m always curious to see how someone else envisions a world that I love.  Hopefully, Hollywood grants my wish for a few of these sometime!

I will never stop talking about how much I love Illuminae, as well as the series as a whole.  Honestly, I can’t even begin to think about how amazing this movie adaptation could be with the right studio and a hefty budget.  There’d be amazing fight sequences and so much intrigue that would make for a fantastic sci-fi action flick.

Princess Academy is a favorite book of mine from my childhood and I wish so badly that I could see a movie of it.  The descriptions of the small mountain village setting always sounded picturesque and begging for an adaptation filmed in a beautiful location.

Since this is a new and in-progress series, I think Scythe probably has the best chance of getting an adaptation anything here.  It also wouldn’t take the same level of special effects that the average sci-fi movie would, which would make this one significantly cheaper to potentially adapt.  For anyone who wants just a small taste of how awesome this would be as a movie, an official book trailer exists that is worth watching.

The Upside of Unrequited

As many people know, Love, Simon is a movie adaptation of one of Becky Albertalli’s other books.  In addition to Simon Vs. the Homo Sapiens Agenda, however, Albertalli has written two other books set in the extended “Simon-verse”.  My favorite of the three titles is the second book, The Upside of Unrequited, that actually follows the cousins of Abby from the initial book.  Since people loved the first movie, I would love some adaptations of the others, as well! 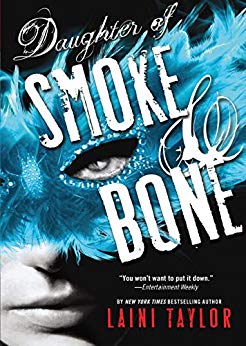 Rounding out this list is a book that I read a long time ago, Daughter of Smoke & Bone by Laini Taylor.  More than anything else, I just want a movie for this because of the setting.  An entire movie set in Prague would be beautiful, and I’ve always wanted to know what others believe some of the more grotesque creatures in this fantasy series look like.

It was really hard to choose five because I have dozens of books that I wish would become movies, but I did the best I could!  What books do you wish would be made into movies?  Let me know in the comments below!

27 thoughts on “Top 5 Tuesday: Top 5 Books That Should be Movies ASAP, Please”