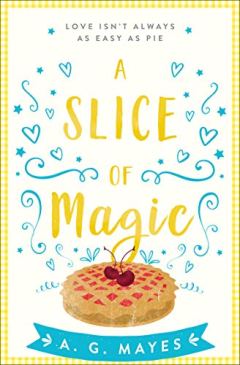 Title:  A Slice of Magic

A plea she can’t ignore, a town of secrets and a magical recipe for love – or disaster…

Susanna Daniels has spent over twenty years wondering why her beloved Aunt Erma disappeared from her life. When Aunt Erma leaves a voicemail asking for help at her pie shop, Susanna thinks she’s finally going to get the answers she’s been waiting for. But when Susanna arrives in the small town of Hocus Hills, Aunt Erma is gone, leaving only a short note, her mischievous dog, Mitzy, and a pie shop with a mind of its own to run…”

When I picked this up off of NetGalley, I wasn’t really sure what to expect.  Typically, I wouldn’t say that I read a lot from the women’s fiction genre because it tends to trend a little old for me.  A lot of the protagonists are at least a decade older than I am and I find it difficult to really put myself in their shoes.  Still, the premise of this book sounded intriguing enough to give it a try, and I’m glad I did.

As the description shows, the basic plot is that Susanna’s aunt has disappeared mysteriously and left her to run the pie shop in a small town called Hocus Hills in her absence.  As the name of the town may suggest, not everything is as it seems in this strange new place and Susanna is wrapped up in the middle of a lot of strange events unfolding.  Honestly, the premise wasn’t working for me at first.  I struggled to read the first fifty pages because I was really bored.  Susanna came off as whiney and none of the secondary characters were interesting enough to make up for the protagonist being uninteresting.

What’s strange, though, is that after fifty pages, a switch just flipped in my brain and I was head over heels in love with everyone and everything in this book.  Susanna became tenacious in her determination to become a master baker without any major training and a lot of pressure hanging over her head.  Secondary characters that were initially unlikeable became fascinating as I began to learn more about them.  Most importantly, the plot picked up significantly and something actually started happening!

Something I was not expecting from this book was the amount that it kept me on my toes.  When I picked it up, I was expecting something fluffy and light, which is definitely what I got here, but A.G. Mayes still had some great surprises up her sleeves.  Even as someone that generally is good at guessing plot twists, at least some of the revelations in store for the characters took me by surprise and kept me guessing until the very end.

One slight word of warning to potential readers is that this book is promoted in a misleading manner.  It is frequently billed as a romance on promotional materials and, while there is romance, it is minimal and not the focus of the story.  This is a book that focuses on family and friendship ties.  Personally, I preferred this because it made the plot feel like a breath of fresh air compared to the heavy romances that dominate the genre, but it would be best to not go in with expectations for a strong romantic subplot.

It’s hard to rate this book because I almost didn’t finish it due to getting off to a bad start, but the other three-quarters of the book more than made up for the beginning.  If you like Sophie Kinsella or just want a light-hearted read that doesn’t take itself too seriously, I would definitely give this one a try because it’s a quick read, regardless of the slow start.  A.G. Mayes is definitely an author I’ll be reading again in the future!

Are you interested in reading A Slice of Magic?  Let me know in the comments below!

Note:  I received this title from NetGalley.  All thoughts and opinions are my own.

5 thoughts on “A Slice of Magic Review”