This is the third day of the Fantasy AdventureAThon, and I’m having a lot of fun keeping track of what I’m actually doing as I go.  I think I’m basically going to treat this week like I’m publicly journaling, so I can look back and see what I accomplished throughout the readathon.

6:00 AM:  I ended my blog yesterday saying that I didn’t think I would read anymore after finishing my favorite book of the year so far, The Seven Husbands of Evelyn Hugo, but I ended up deciding to pick up A Darker Shade of Magic for a bit before bed.  It turns out, I got really hooked and ended up reading for another hundred pages.  I’m now about 140 pages from the end, give or take, so my main goal is to finish that today and start book four.

Unfortunately, the negative aspect of deciding to stay up late reading is that I woke up with a headache that I’m sure is a mixture of sleep deprivation alongside eyestrain from reading an eBook for most of yesterday.  I think I’m going to take it easy with the reading this morning and play some video games for a little while.  Borderlands will be a great break from the constant reading that I have been doing for two days now.

10:00 AM:  I played Borderlands for about an hour after eating some breakfast and I’m just in love.  It’s always a little scary to replay an older favorite title because it may have aged poorly or not be as good as games I went on to play later, but it’s exactly as I remembered it in every regard.  As I write this, I’m actually downloading both Borderlands 2 and the Pre-Sequel, since I have never played Pre-Sequel and I think I picked a class that didn’t fit my playstyle very well in 2, which led me to not like it as much as I had hoped.

After I’ve eaten some lunch, I am going to get back into reading, however, because I want to give my games some time to download so I can play them tonight.  A Darker Shade of Magic is getting quite interesting, although I couldn’t tell you where on earth the story is going from here.  Kell is such a cool character, although I’m not sure if I like his thieving companion, Delilah, yet.  She’s got some interesting depth to her, but that isn’t outweighing how overall annoying she is, given that her kleptomania keeps getting everyone around her in trouble.  I will be curious to see if the remainder of this book will redeem her in my eyes or not.

2:00 PM:  I have officially finished the third book of the readathon with A Darker Shade of Magic.  Since this book is both a Harry Potter readalike and my first book by V.E. Schwab, one of the authors I singled out as never having read before, I will be writing a full review in the next week.  In short, I really enjoyed this book, though I found that the pacing was uneven, with most of the interesting plot elements occurring in the last 100 pages.  Interestingly enough, though this is the first book in a trilogy, the plot actually wraps itself up quite nicely, so I’m not sure that I’m in a huge rush to pick up the sequel.  I’m not opposed to continuing on, but I also don’t feel like I need to in order to feel satisfied with the conclusion here.

My next book is going to be Give Me Your Hand by Megan Abbott.  I love reading thrillers every once in a while because they’re fast-paced and exciting, so this should be a fun change of pace from A Darker Shade of Magic, that had some incredibly dull bits in it.  I’ve read two other books by Abbott in the past and enjoyed them both, but she’s yet to produce a five-star read yet, so we’ll see if the third time is the charm.

7:00 PM:  As I eat some chili for dinner, I’ll update my progress.  I’m currently about fifty pages into Give Me Your Hand and I’m not loving it so far.  It’s very slow and I have a suspicion that I know where the plot is going, which is not a good sign in a thriller.  Of course, thrillers can be made or broken based on their plot twists, so this could get anywhere from a one to five-star rating based upon how the twists and turns go.  If it doesn’t surprise me somewhere along the way, however, I don’t anticipate giving this more than two or three stars.

Apart from that, I decided to take another Borderlands break, which I’ll probably play for the remainder of the evening.  While I play my second playthrough with the Siren class, I decided to also work on a first playthrough for another class.  I have this bucket list dream of being the person that plays all of the Borderlands games as every class, learning every character’s ins and outs.  I’m not sure if I will ever get all the way there, but there’s no harm in working my way through as another character.  In fact, I should probably work through the first area of the game as all of the classes before committing to a hard mode playthrough as my Siren, just in case I find a character I like more. 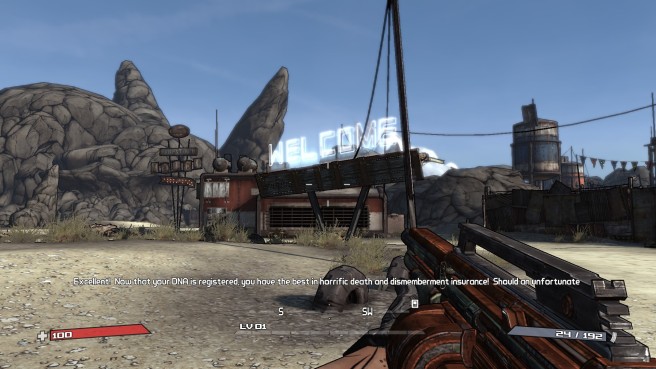 I think I’m going to sign off for this reading blog post.  I’ll read a bit before bed and give an update tomorrow morning regarding what I ultimately choose to read, though I’m thinking I will probably start Throne of Glass so I can spend tomorrow alternating between that and Give Me Your Hand.  Let me know your thoughts on these books, or on Borderlands, in the comments below!