Chaos is the name of the game for Claws of Furry.  As I started up the game for the first time, I believed I was witnessing the latest in a long line of Castle Crashers clones.  At the end of my time with the game, I found that Claws both manages to distinguish itself in a crowded genre, while still having some cumbersome design choices that bar it from becoming the new action platforming standard.

When new players begin playing Claws of Furry, they are greeted by a short cutscene that explains the primary plot motivation.  The protagonist, a ninja cat, has just watched his master get kidnapped by an evil entity, thus starting him on a quest to save his teacher.  The premise is simple and never expands much beyond this, but this is not a genre where story is particularly important.  The plot is only there to set the goofy tone of the game, and to that extent, the story is beautifully served out.

Being an action platformer through and through, the player’s ninja cat has a variety of moves to allow for a multitude of strategies for slicing through enemies.  There’s a quick dodge roll ability for getting out of a bind quickly, a upward fist attack that throws enemies in the air, a distance attack, and a traditional slashing ability.  These abilities are all needed, however, as different enemies have a variety of strategies the players must use in order to dispatch enemies with grace and speed.

The feature that makes Claws of Furry most unique, however, is also a feature that may cause some controversy:  It is a roguelike game in which one death sends the player back to the beginning.  As time goes on, the player collects costumes for clearing certain goals that will make future runs easier, giving a sense of gameplay progression.  While I appreciate that this adds weight to utilizing effective strategies to taking out enemies without losing health, a game in the roguelike genre needs to have perfectly precise controls, and this game fails to deliver on that front.

Now, don’t misunderstand here, because, on the whole, the controls for this game are pretty solid. With that said, however, there were a number of moments where I got irritated about the inconsistency of the dodge button, or that a jump missed slightly and I leaped right into an enemy, losing a great deal of my health.  On a smaller note, I can’t stand that the “B’ button on the Switch control layout is used as the accept button instead of the near-universal cancel button that it rightfully should be.  It’s something that can be worked with and adapted to, but it feels like an oversight on the developer’s part and led to me cancelling out of commands instead of accepting them.

While I found myself irritated with the roguelike mode at times, there is also a mode in this game dubbed “pussycat mode” that removes the roguelike permanent death aspects, and I personally found that I preferred to play the game in this manner.  The sometimes annoying controls bother me less when I only need to restart the level upon death, and not the entire game.  Of course, if even pussycat mode is too difficult, then maybe calling upon the help of a friend or two is the right way to go.

One of the best ways to play this game is with friends.  Claws of Furry supports up to four players in local co-op, allowing friends to take up the fight together.  I found that I much preferred playing the game with friends, as it allowed for more advanced tactics.  Players can work on drawing enemies together so they attack each other, or they can juggle enemies to keep them in the air and prevent them from attacking.  Having this much chaos on screen while playing did lead to the occasional slight framerate dip, but not to the point that it severely impacted my enjoyment of the game or caused any major graphical issues. 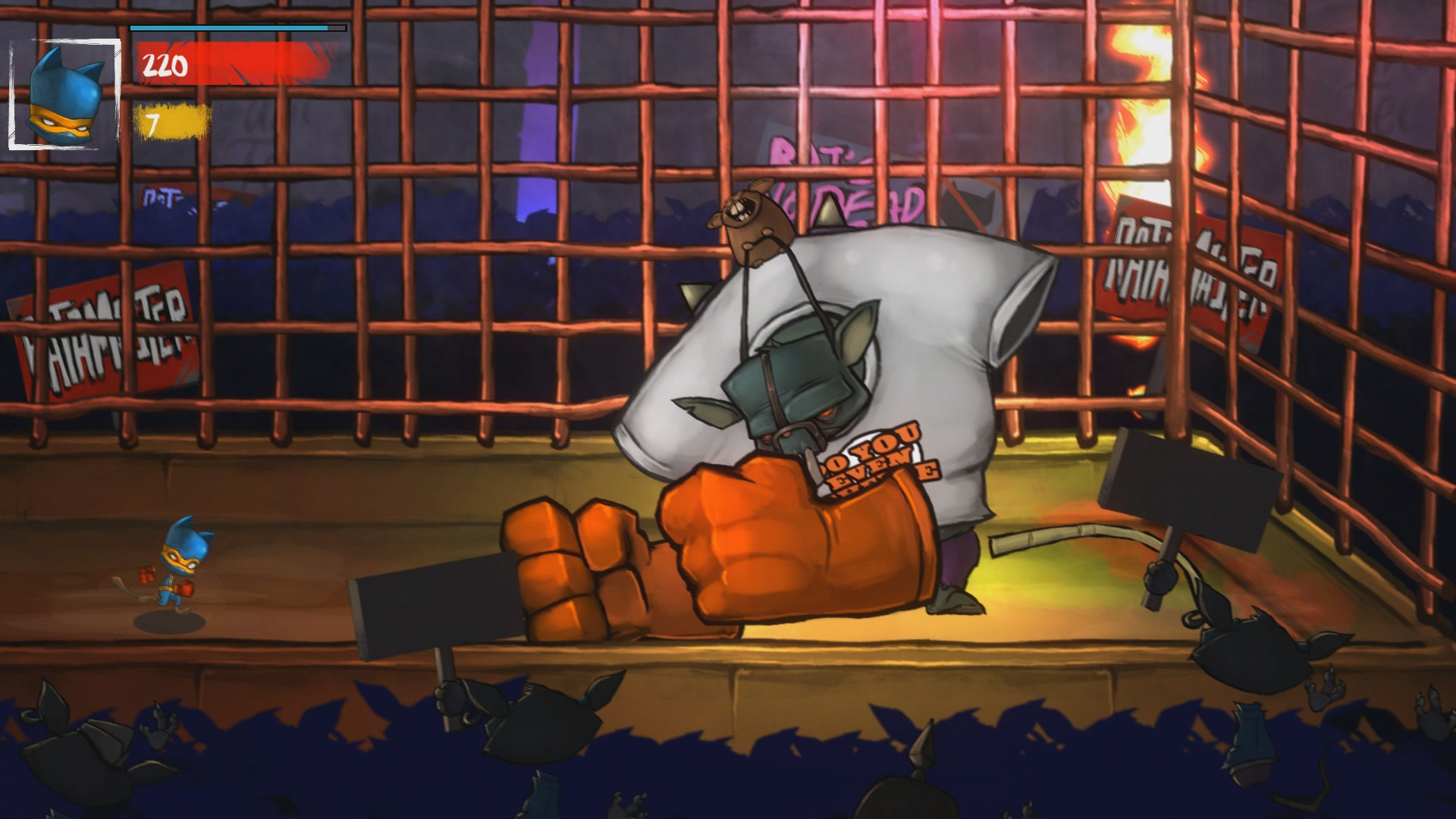 Speaking of graphics, this was a major strength of the game.  The graphics are hand-painted, giving a colorful aesthetic that reminds me of old superhero comic books.  Enemies are uniquely styled to the area of the game, and the animation lets all of the characters move fluidly.  My favorite part is that many of the unlockable costumes are designed to be tongue-in-cheek references to old superheroes, such as Wolverine and Deadpool.

I enjoyed the hours I spent in Claws of Furry, but it is still a game that is far from flawless.  The controls have their moments of inconsistency, and I personally found that these controls hurt the potential fun from the “one more play” roguelike genre.  Still, there is some chaotic and casual fun to have here by playing the non-roguelike pussycat mode with a few friends.  It’s only ten dollars, so if you’re looking for a game to play with friends and you like the action platformer genre, it is definitely worth checking out.

I received a free review copy of this game (my first ever!).  Let me know in the comments if you’re interested in picking this up, or what other games you’re excited for.

3 thoughts on “Claws of Furry Review”