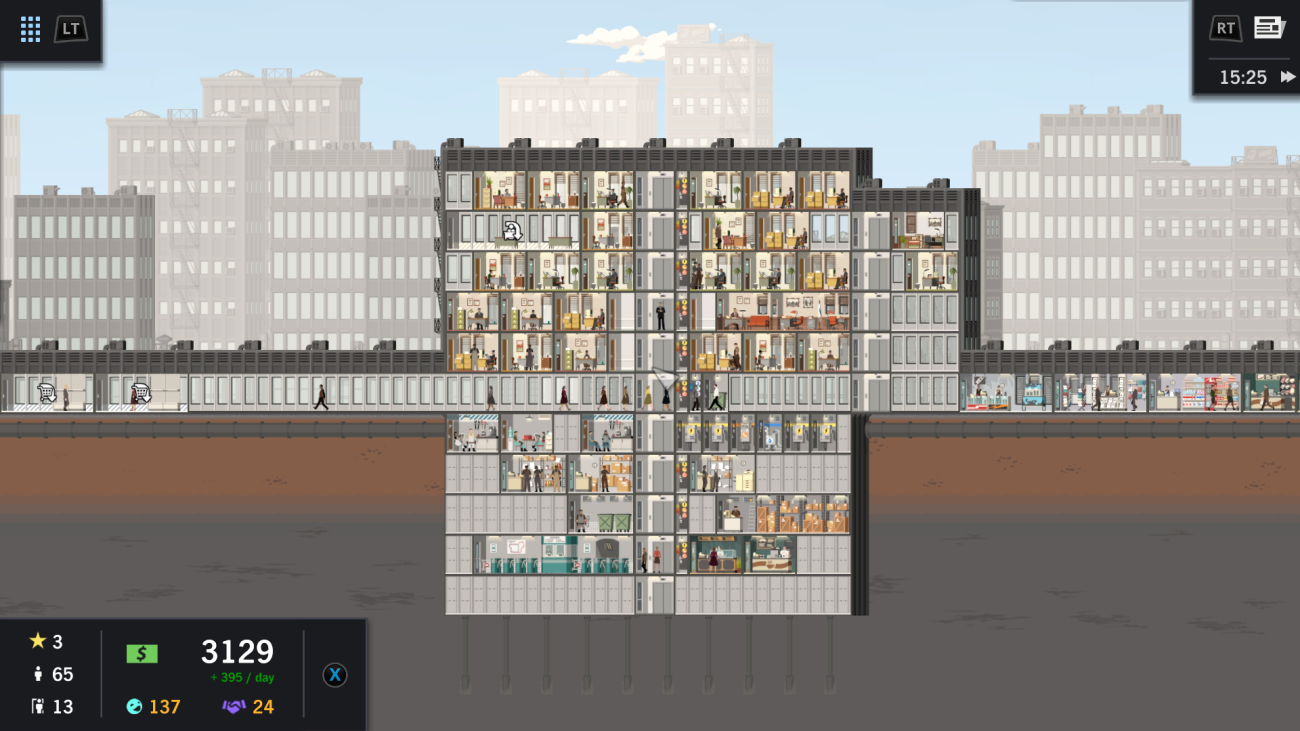 I am a huge fan of the Tropico series, so when I had an opportunity to get a review code from Kalypso for Project Highrise:  Architect’s Edition, I knew I couldn’t pass up the opportunity to see what else the publisher has to offer.  Tycoon-style games are a personal favorite of mine, so managing a skyscraper full of apartments, offices, and shopping areas is a dream come true.  After having played quite a bit of the game, it is time to give my impressions and personal opinion of my latest management adventures.

The first thing I did upon launching Project Highrise was to open up the tutorials.  A tutorial’s quality can make or break a strategy or management title, and I also like to make sure I have a foundation of knowledge before moving into the sandbox and scenarios.  I can happily report that the game’s tutorials are stronger than most, with interactive elements that help to learn all of the basic building and management mechanics of the game.  With that said, however, I found that the resort tutorial was far worse than the basic game mechanics tutorial, which meant I had a lot more trouble building resorts when I made an attempt.

Speaking of building, it makes sense to talk a little about the actual central mechanics of this game.  In Project Highrise, the player is tasked with managing a skyscraper, from building the actual floors to choosing what businesses move in.  The skyscraper can take on any form the player chooses, whether that be offices, condos, storefronts, hotel rooms, or a mixture of them all.  Each tenant that pays rent may also expect additional services, like a copy room or bottled water services, so these must also be built in order to keep tenants happy.  As time goes on and the skyscraper gets larger, prestige and influence is gained, which allows for additional perks and larger businesses to be purchased.

I really enjoyed the gameplay loop of building floors and offices that pay the rent to afford more floors and offices for a while, but after the skyscraper gets to a certain height, the grind becomes less interesting and more repetitive.  This is especially true in the scenario mode, as the scenarios are not small tasks and take a sizeable amount of time to complete.  Part of it might be that playing longer game sessions just brings out the repetitiveness of the experience, but I also suspect that there isn’t as much depth to this title when compared to its peers.

Graphically, the game is simple but effective, and it does its job.  The menu layout is also relatively intuitive, with a lovely feature to press a button to learn more about what every menu option does, which is fantastic for forgetful people like myself.  I was worried about whether the text would be easy to read from across the room, and I am happy to report that I never had any difficulties there.  The text was large enough to be legible from a distance.  My only issue with the aesthetics is that the music and sound effects grated on my nerves after a while, as it all reminded me of elevator music (which I suspect was purposeful, given the skyscraper theme), but that’s easily solved with the mute button on my TV and not a deal-breaker.

The biggest concern I had about Project Highrise was the control layout.  I am not typically a huge fan of playing tycoon-style games on consoles because the controls tend to be weird in the absence of a keyboard and mouse, so I wasn’t sure what to expect when I loaded this title up on my Xbox.  Thankfully, the control scheme here mostly works, as I rarely found myself missing my keyboard while I moved around placing new floors and electrical wires.  The only time I noticed an issue with the controls was in the menus.  My brain always defaults to using the D-Pad to navigate menus in games, but in Project Highrise, the D-Pad controls how fast time passes in the game.  This led to me frequently pausing and speeding up time unintentionally every time I opened a menu, and while this isn’t a major inconvenience, an ability to prevent pausing time in the menu to allow use of the D-Pad would have been great.

Ultimately, I had a lot of fun with Project Highrise.  The game was fun and I definitely want to play more of it in the future, although my gameplay sessions will probably stay short and sweet so repetitive gameplay mechanics don’t impede my experience.  While the game has its flaws, I would still recommend that everyone check it out for the console of your choice, though I wouldn’t go in expecting to get three-hundred hours worth of gameplay out of the experience.

Thanks to Kalypso for providing me a review code of this title.  All thoughts on this game are completely my own.