Compiling a ranked list of the games I played in 2018 (see the previous section of the list here) got both harder and easier as time went on.  I prefer to talk about the games I enjoy, so getting to the point where I have more good to say about a title than bad feels like a huge relief.  The problem is, the more I enjoy the games, the harder it is to rank them.  While I still have some critiques for most of the titles I played this year, this section also marks where I begin to legitimately like and fully recommend everything I played.  As always, I will be providing a link to purchase the game on the platform I initially played it on in the event that the game sounds intriguing.

Note:  Clicking through to purchase the games I talk about may contain affiliate links.  Purchasing something using one gives me a small commission at no extra cost to you!  Thanks for supporting my blog!

I have a separate post that is partially a review of Owl Watch and also a general assessment of why the saturation of the market can be so damaging to indie developers.  A copy of this game was provided to me by the publisher, which allowed me to try something that I may otherwise have passed over because there are just too many games releasing every day to keep up with them all.  This was quite a fun game, but I do wish there was some more overall polish and content in it.  Whenever possible, I try to give some time to smaller indie titles that aren’t getting a lot of buzz and, in this case, my experimentation paid off and I found something that was fun, even if it was only 45 minutes from start to finish. 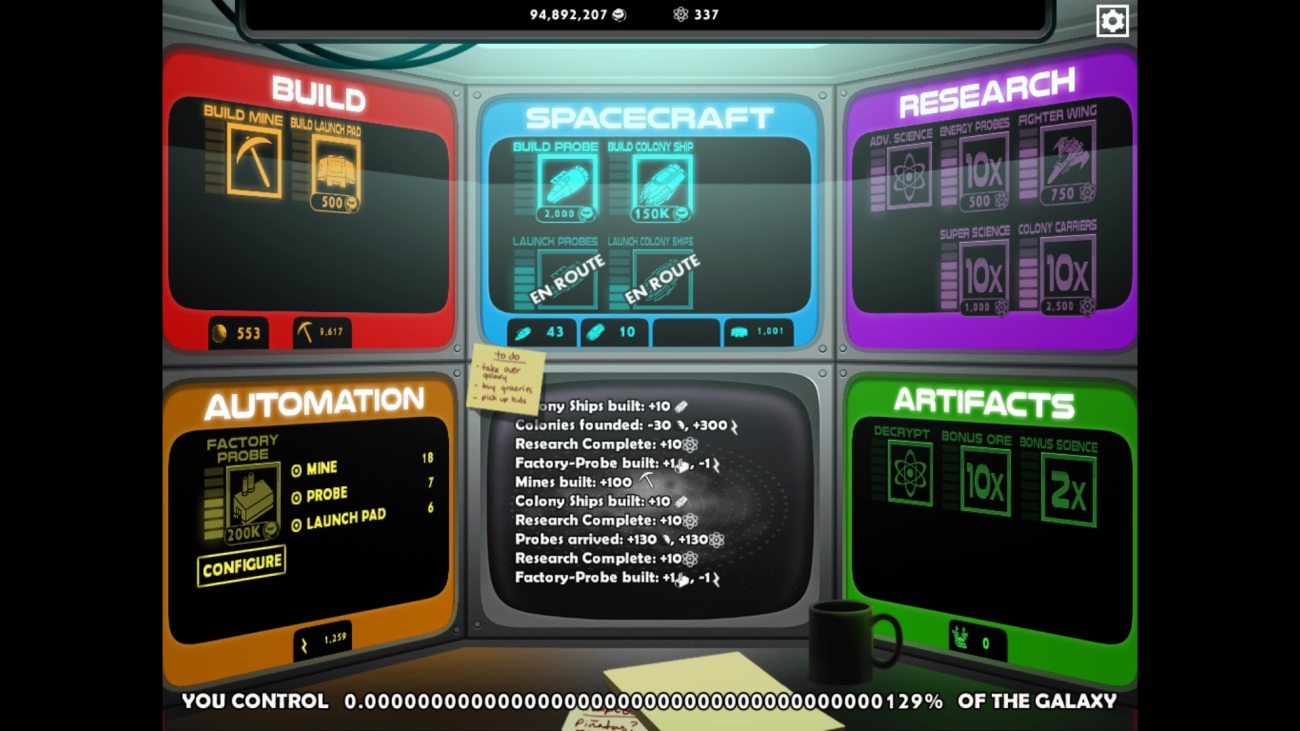 Whenever I’m having a busy day and need something to distract myself, I love to try a new idle game because it’s nice to have a game running in the background that I can flip to whenever I need a quick break.  This is how I found Galaxia.  My favorite type of idle title is one that combines deep strategy with a definitive ending.  In this case, the end goal is to control 100 percent of the galaxy, and this is done through a unique automation process.  After building enough mines, I can build mine factories.  Eventually, however, I can build factories to make more mine factories, and then make factories to build those factories, on and on for roughly thirty layers.  Figuring out how to manage resources appropriately to build up a huge production chain is incredibly engaging, and since it’s a free browser game, I’d absolutely recommend giving it a try.

40.  The Awesome Adventures of Captain Spirit

After Life is Strange and its prequel broke my heart, I naively started The Awesome Adventures of Captain Spirit with my husband, saying that I couldn’t imagine that a free minisode only a few hours in length could possibly hurt me the way the main series did.  I was wrong, and I give my deepest apologies to DONTNOD Entertainment for underestimating their aptitude for emotionally impactful storytelling.  Since this is more or less a playable teaser for Life is Strange 2 and also contained one of the worst-designed puzzles that I have ever experienced in a game (I will forever despise phone passwords from here on out), I put it a little lower on the list.  Still, it’s free and absolutely worth playing,  though it’s best enjoyed after the first game and before the second.

Killing Time at Lightspeed is a difficult title to adequately describe.  In a lot of respects, it’s just another variation on a visual novel.  A person is moving to a space colony at a speed faster than light while browsing through a social media platform.  Every time the page refreshes, years go by and the world changes immensely from the last check-in.  There’s not much gameplay here and the coloration of the screen can be grating on the eyes after a while, but the themes explored here resonated with me so much that they haven’t left my mind since I finished playing.

Yes, Loot Box Quest is yet another idle game.  In fact, most of what I said about Galaxia applies here, as well.  There’s a definitive ending and a lot of different strategies are necessary to ultimately get there.  The reason I love this so much, however, is because of the overall commentary on the games industry as a whole.  There’s some real satire here about the role of developers, loot boxes, and content creators in gaming, and it does a lot to elevate this good title to a great one. 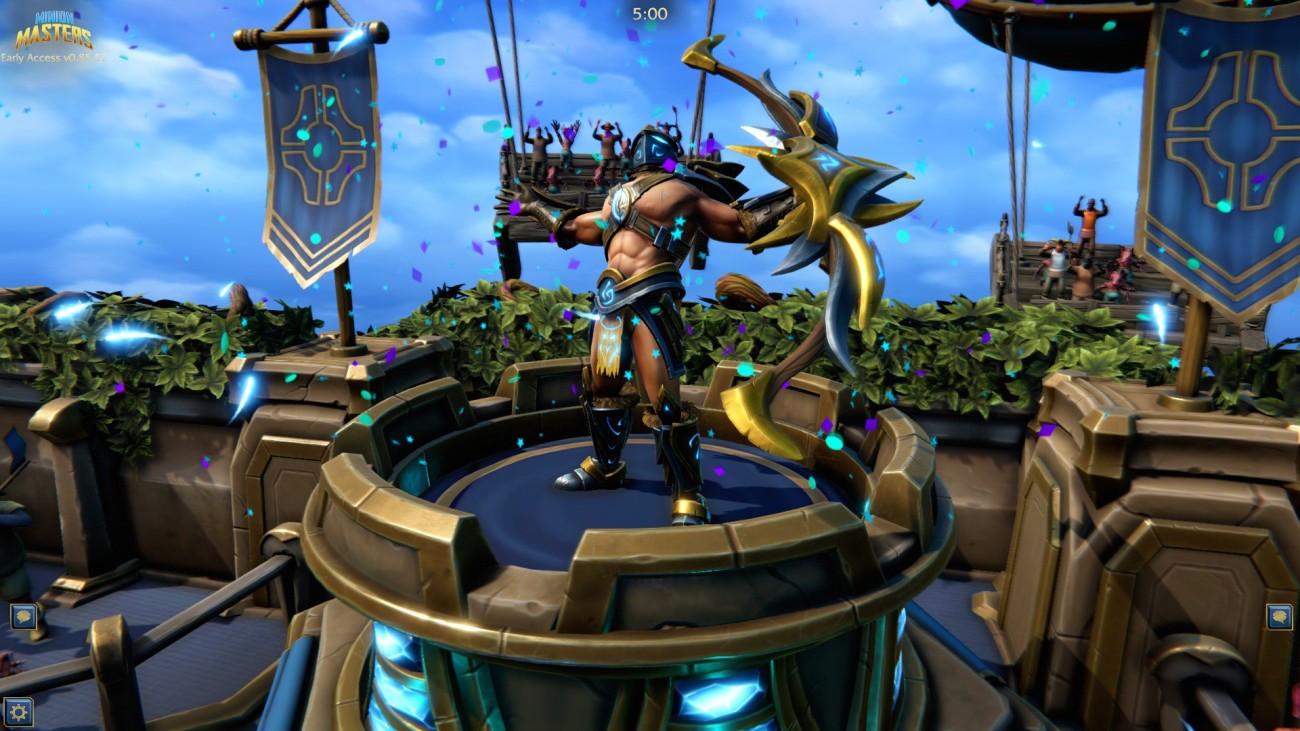 I rarely get into online titles because I prefer to use gaming as a means of escapism, and this includes avoiding other people while playing.  That said, I decided to give Minion Masters, a free-to-play online game, a chance because I just wanted something quick and easy to play when I get frustrated with a boss fight and need a break.  Turns out, this is exactly the right way to play Minion Masters, as I frequently find myself going in for a round or two when I have a few spare minutes.  The mechanics are simple to pick up, utilizing a very basic deckbuilding format, and matches are super quick, usually lasting no more than five minutes.  Since it’s free, I would recommend playing a round or two to see how it works!

This is the first review copy that I ever received, and I’m glad this allowed me to give Claws of Furry a try.  It’s an interesting premise, as it pits the four-player brawling action of a title like Castle Crashers with a traditional rogue-like game.  I’ll fully admit that, since I’m really bad at both rogue-likes and sidescrolling titles, I played primarily on the mode that removes the rogue-like elements, but I loved the additional accessibility the game has by including this mode at all.  The gameplay was a little on the stiff side at times and the story was a bit underwhelming, but for some frantic fun with friends, this is a great choice.

When I picked up Little Red Lie, I had no idea what I was in for.  Based on the game’s description, my assumption was that I would be playing through a game that shows the horrors of poverty and the income inequality in society.  While all of this is true, the title reaches far beyond these themes to craft a dark and compelling story.  At times, the game felt like it could have improved with a little bit of editing to shave off an hour or two, but I still finished the game in a single sitting, desperate to know what happens next.  I reviewed this earlier in the year, so check here for more details.  In short, however, if slow-burning and twisted narratives are your thing, Little Red Lie is one to check out.

Probably a third of what I play in any given year are smaller titles that I picked out specifically because something else was stressing me out and I needed a break.  Pirate Pop Plus is a simple arcade game stylized to look like an old handheld title, and it’s the perfect pick-up-and-play title.  The mechanics are simple and addicting, leaving me constantly trying to chase my own high score.  While arcade games aren’t often my genre of choice, I couldn’t stop playing this one sometimes and it’s definitely worth a look.

How many people reading this grew up on Humongous Entertainment titles?  I know I spent hours in front of the computer as a child, fully invested in helping Freddi Fish find a conch shell and Pajama Sam overcome his fear of the dark.  Of all of the characters in the company’s repertoire, however, Spy Fox was probably my favorite.  I only owned SPY Fox in “Dry Cereal”, but I must have played through it dozens of times, trying to see every possible combination of objective and subsequent ending.  As an adult, it certainly isn’t as complicated or difficult as it once was, but it’s still a legitimately fun point-and-click adventure worth playing.

When A Hat in Time first came out, I was incredibly hyped for it.  It looked adorable and I am a huge fan of 3D platforming titles.  By the time I finally got around to playing it, my hype levels were higher than ever, and to some extent, that was the game’s downfall.  I do love many aspects of it, such as how the animation style is just about the cutest I’ve ever seen in a game.  On the other hand, the platforming wasn’t quite as precise as I wanted, and I found the level design to be uneven.  Some levels clearly had more thought put into them, such as the initial Mafia Town area, than others, like the lazily designed Alpine Skyline area towards the end of the game.  Don’t get me wrong, this game is fantastic and everyone should play it, but I don’t think it lived up to my own, admittedly far too lofty, expectations.

Okay, I’m going to spoil the rest of the list a tiny bit by saying that the Danganronpa franchise, as a whole, is one of my favorite discoveries of this year.  There’s a unique horror vibe to these titles about locking teenagers in a school and an animatronic teddy bear forcing them to kill each other in order to achieve freedom.  In a lot of ways, Danganronpa V3:  Killing Harmony is the best entry in the franchise.  There are more characters that I love and got attached to in this batch of students than in the prior two titles combined, and I was emotionally blindsided on more than one occasion.  Unfortunately, the formulaic nature of the series is what kept it from being higher on my list.  By the third time with the same basic game formula, I was far more adept at picking up on stale plot twists that had been previously used, and I solved more than one murder simply because I just instinctively knew who the writers would pick as the killer.  While I would recommend playing the series in order, playing this one first would probably give an overall more positive impression for the player.

This may be the best thirty-minute experience that I have ever had in a video game.  Usually, when a title is this short, I complain that I want more, but the genius of Florence comes from its brevity.  A longer title wouldn’t be able to create the same emotions that this whirlwind trip through a romance between two people could.  Given how short it is and that it is the cost of a cup of coffee, I would recommend going in completely blind and just trying it.

Rounding out this portion of the list is Old Man’s Journey.  This is actually the very first game that I ever reviewed, and I enjoyed it a lot.  There’s an emotional story to be told here, as well as a number of landscape-altering puzzles that gradually increase in difficulty.  Additionally, this may be one of the most stylistically unique and gorgeous games I played this year, leaving me to just sometimes stare at my screen for a few seconds in awe before moving.  Unfortunately, as is the problem with many shorter titles, the game’s length never allows the mechanics to get all that challenging, which prevents players from ever feeling like they mastered the title.

That’s a wrap on part three!  Parts four and five are coming soon, containing a number of titles that I will be gushing about in great detail.  Have you played any of the games on this list?  Let me know in the comments below!