As part of my Fantasy AdventureAThon journey, I want to keep everyone updated on my day-to-day reading and other activities.  On days that I’m able to film, I will be posting vlogs because I feel like the video format better suits this sort of update, but I still want to make sure that daily updates happen, hence this blog post.  Today, I’m going to try doing this in a journal entry style, though I may shake the format up throughout the week.

12:00 AM:  I am not a night person.  I’m actually far more interested in waking up at 5 AM than I am at staying up until midnight.  That said, I’m really excited to get started and I wanted to make sure I got off on the right foot.  Therefore, I’m going to read Sea Prayer by Khaled Hosseini before I go to bed tonight.  It’s short and illustrated, so I should be able to finish it before going to sleep and therefore be one book closer to my goal of seven books in seven days!

12:45 AM:  Reading Sea Prayer right before sleeping may not have been the best idea because now I can’t stop thinking about it.  Hosseini does a great job at conveying a lot of emotion and exploring the Syrian refugee crisis in just a few short pages.  I’m going back and forth between giving it three and four stars and will give a final determination in my wrap-up at the end of the week, but I can definitely recommend it.  One book down, six to go!  Now, I should probably go to sleep because I’m about ready to pass out.

5:30 AM:  My body doesn’t really believe in sleeping in, so I guess I’m awake now.  I don’t have the energy to physically get out of bed at the moment, so now seems like a good time to start one of my ebooks!  I’m really excited to read The Seven Husbands of Evelyn Hugo by Taylor Jenkins Reid, as I eagerly bought it a few weeks ago and purposefully waited until this readathon to pick it up, so I think I’m going to start there.  The hype surrounding this book is intense, so I hope it meets the really high expectations I’ve come to have. 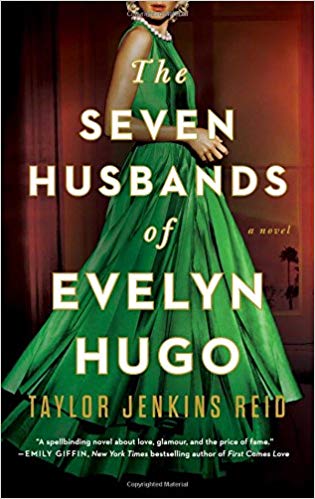 8:00 AM:  I finally dragged myself out of bed and am now sitting here with a cinnamon roll Pop-Tart and some earl gray tea.  I’m really the paragon of healthy eating.  Anyway, I am only about thirty pages into The Seven Husbands of Evelyn Hugo and I am head over heels for it so far.  Evelyn Hugo feels like a real person even though I know she’s fictional, and I can’t remember the last time that I read a book containing a character that felt so well-done.  Given that I haven’t even gotten to the part where she starts telling her life story yet, I can’t even begin to imagine how much better this book is going to get.

As much as I’d like to keep reading, I actually really want to start A Darker Shade of Magic because it’s the group book and I want to be able to discuss it with others participating in the readathon.  I also need to make sure I do my daily photo challenge on my Instagram account, which is to take a picture of the book that got me into fantasy.  My intention is to take a picture of Harry Potter and the Goblet of Fire because, while I loved the Harry Potter series from the start, the fourth entry was the one that endeared me to the genre as a whole.

10:30 AM:  I eat my breakfast super early and have a pretty fast metabolism, so I decided to eat my lunch early, as well.  Today, I’m eating some super spicy and awesome ramen alongside some Pepsi.  Again, I am clearly a very healthy eater.  I’m about fifty pages into A Darker Shade of Magic and I’m enjoying it, but not necessarily in love yet.  The first entry in a fantasy series always has it rough because all the world building falls to it.  This goes one of two ways, either no plot occurs in the first part of the book, or there is a plot, but it’s one that the reader doesn’t really understand.  V.E. Schwab appears to have picked the former so far, as little has happened in fifty pages, but I have a strong working knowledge of the magic system.  It’s not a bad choice, but the rest of the book’s plot will need to make up for lost time in order to properly engage me.

After I’ve finished eating, I’m going to read more of A Darker Shade of Magic and The Seven Husbands of Evelyn Hugo, alternating between the two as I see fit.  Eventually, I’ll probably want a break from reading take a video game break.  At the moment, I’m partway through a replay of Fallout 4 and Borderlands, so those would both be good titles to go do a quest in and quit in favor of more reading.

5:30 PM:  I’m currently eating my dinner of spaghetti, which is the healthiest meal I’ve consumed all day.  I’ve been reading all day, with the exception of doing a few missions in my second playthrough of Borderlands.  I have been continuing on with both A Darker Shade of Magic and The Seven Husbands of Evelyn Hugo and have gotten far enough in both of them to give some initial impressions.

I’m enjoying A Darker Shade of Magic at 100 pages in, but it’s a little dry and slow at the moment.  There’s still very little actually happening, and while I like Kell himself well enough, I haven’t spent enough time with anyone else to get attached yet.  Overall, I can’t help but feel like I’m a little bit underwhelmed by this book, even though I don’t hate it by any means.  If I were to give a prediction for a star rating right now, I’d probably give this a solid three stars, but we’ll see how the rest of the story goes.

The Seven Husbands of Evelyn Hugo, on the other hand, is absolutely phenomenal and exceeding my already lofty expectations.  I have read about 150 pages so far and I just can’t stop.  This is a character-focused novel done right in every regard and should be used as an example to future writers.  Even if I end up hating everything else I read during this readathon, it will be a success simply because it finally pushed me to read this book.  Unless there’s a huge lull in the rest of the story, I can’t envision giving this anything less than five stars.

9:45 PM:  I’m planning to go to bed early tonight because I didn’t get a ton of sleep last night, so I thought I’d do one final update with my progress.  I have read up to the halfway point in both The Seven Husbands of Evelyn Hugo and A Darker Shade of Magic.  Seven Husbands is still on track to be one of my favorite books of the year and is still the more enjoyable of the two reads, but ADSOM is beginning to grow on me now that I’ve finally found the plot after some lengthy world-building.  While the start is far too slow, I am having a lot of fun now!  It’s getting closer to being a four-star read now with the increased plot pacing.

That’s it for this update!  I do hope to finish both A Darker Shade of Magic and The Seven Husbands of Evelyn Hugo tomorrow, and I think there’s a decent chance that I’ll be able to do a vlog tomorrow instead of a written update!  Let me know in the comments below if you’ve read any of these books before!