The Past and Other Things That Should Stay Buried Review 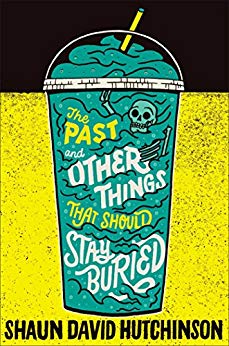 Title:  The Past and Other Things That Should Stay Buried

Description:  “Six Feet Under meets Pushing Daisies in this quirky, heartfelt story about two teens who are granted extra time to resolve what was left unfinished after one of them suddenly dies. A good friend will bury your body, a best friend will dig you back up. Dino doesn’t mind spending time with the dead. His parents own a funeral home, and death is literally the family business. He’s just not used to them talking back. Until Dino’s ex-best friend July dies suddenly–and then comes back to life. Except not exactly. Somehow July is not quite alive, and not quite dead. As Dino and July attempt to figure out what’s happening, they must also confront why and how their friendship ended so badly, and what they have left to understand about themselves, each other, and all those grand mysteries of life. Critically acclaimed author Shaun Hutchinson delivers another wholly unique novel blending the real and surreal while reminding all of us what it is to love someone through and around our faults.”

This is my first foray into Shaun David Hutchinson’s work, but I have had my eye on his books for a long time.  His mixture of contemporary coming-of-age stories with a small hint of speculative science fiction sounded far too unique to pass up.  When I saw The Past and Other Things That Should Stay Buried on NetGalley, I thought the premise sounded fascinating and I was immediately intrigued.  After finishing it, I believe that there’s an important story at the heart of this book, but it sometimes gets lost along the way.

The Past and Other Things That Should Stay Buried follows Dino and July.  July has recently died, but as Dino, her ex-best friend that helps out at his family’s funeral home, is doing her makeup before her funeral, she comes back to life in the morgue.  Now, the two of them must work together to figure out what happened to July, as well as confront the reasons that their friendship ended.  As I said earlier, I was completely sold on the premise because I love everything zombies, and this seemed like a fun twist on the usual formula by omitting the brain-eating parts of undead lore.  Unfortunately, in execution, the story didn’t quite live up to my expectations.

This is a character-driven story in every regard, as everything revolves around Dino and July.  Dino needs to work on his relationship with his boyfriend, Rafi, and July needs to come to terms with the fact that she is dead.  Dino’s side of the story is impactful and I loved watching him navigate his relationship and grow throughout the story.  He is trying to come to terms with all of the changes in his life recently, and I have a lot of empathy for him.  The same cannot be said for July.

While I appreciate July’s role in Dino’s development throughout the book, as an actual character, I couldn’t stand July.  She is loud, arrogant, and a toxic friend in every regard.  While this aspect of her personality is addressed and challenged throughout the story, it doesn’t make reading from her perspective any more fun, especially as she continues to repeatedly not understand throughout the story how her words and actions can hurt others.  Reading from the perspective of an inherently unlikeable character may be fun for some readers, but I do not fall into this camp and found myself wanting to throw my laptop across the room sometimes as I was reading her chapters.

My feelings towards this book aren’t entirely gloom and doom, however, as there’s plenty to love here, too.  First of all, there’s some wonderful diversity here.  Dino is gay, and his boyfriend, Rafi, is trans.  There are some great discussions on homophobia and offensive stereotypes throughout the book that are handled well.  In general, while Dino and July’s relationship is toxic, Dino and Rafi’s romance almost makes up for this and I frequently found myself smiling at their interactions.

The theme is also something to be commended, as books centering primarily around a toxic friendship are few and far between.  On the whole, the fact that July and Dino weren’t a great pairing wasn’t shied away from, although the book generally gave July more credit than she deserved.  There are plenty of young adult books that discuss the intricacies of friendships, but there aren’t many that focus on the idea that, sometimes, friendships need to end for both parties to grow as individuals.

Overall, I can’t help but feel a bit disappointed by The Past and Other Things That Should Stay Buried.  There is a lot of good here, but the end result is marred by some of the more negative aspects of the book.  There’s a good central theme here and Dino’s character is well done, but the central gimmick of July’s death, in addition to her characterization in general, is to the detriment of the title as a whole.  If you are okay with reading from the perspective of an inherently unlikeable character, then you will probably enjoy this more than I did.  Otherwise, this isn’t a bad book, but it’s far from perfect.

Have you ever read a Shaun David Hutchinson book before?  If so, do you have recommendations for which one I should read next?  Let me know in the comments below!

Note:  I received a copy of this book from NetGalley.  All thoughts and opinions are my own.